Book Review: To the Golden Shore 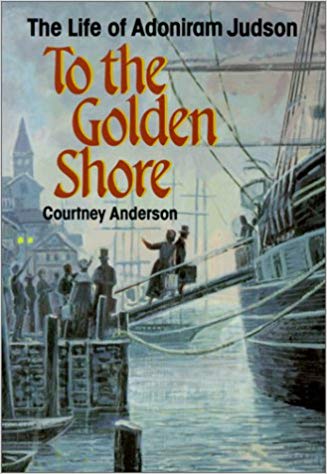 To the Golden Shore: the Life of Adoniram Judson

The life and ministry of Adoniram Judson, the first foreign missionary from N. America to Burma.

This is a must-read by every believer!

The book is written in a wonderful story format. The narrator takes you into the lives of Adoniram’s parents first so you can get a feel for the sort of home life he had. His parents were humble, of upright character, and above all, faithful servants to Christ.  Then, enters Adoniram. The author weaves in an interesting note about his baby blanket being still in a museum somewhere – which is really neat to know.  The author has done a massive amount of research, and it shows in how well you get to know the personality of Adoniram.  Her research has been pulled from diary entries, personal letters as well as church records.

The unwavering faith and devotion of Adoniram should be told about to every believer. Here is a man, faced with impossible hardship, who through it all was completely and totally in submission and adoration of Jesus.

He and his wife traveled to India and from there to Burma. It was an entirely new world for them – a completely different climate, culture, food, language. And for the early 1800’s polite society members, the way the people of Burma lived would have been completely shocking. The author did a great job of conveying a sense of confusion, shock, and isolation. Not only was the travel arduous – the couple braved the dangerous waters of the Indian Ocean in a boat and survived terrible storms at sea, but they also faced devastating loss after loss.

It seemed like just about everyone around them was dying. Then, everything went from bad to worse with the political tensions rising. Through it all, even amidst the vile prison camp, Adoniram praised God. What was also beautiful to read was his adoration and devotion to his wife, Nancy.

Adoniram succeeded in translating the Old and New Testaments into Burmese. He also created numerous Gospel tracks and got them in circulation despite the threat to his life by government officials. Towards the end of his life, Adoniram also created a Burmese-English Dictionary in effort to help other missionaries. Adoniram and Nancy truly loved their new country and people. Though it took six years for the first convert, they remained passionate and devoted to their calling without wavering.

One part of his story that sticks out the most to me is his conversion. Adoniram has just graduated Valedictorian of Brown University and has confessed to his parents that he did not believe in God. It broke his parent’s hearts. And he left home to pursue his dream of being a playwright in New York City (considered the most sinful city in the country at the time.) While traveling, he has to stay the night at a local inn. There was only one room available, but the inn-keeper was hesitant to let him have it, because the man in the adjacent room was dying and his wails were quite loud and distressing. But Adoniram, being used to death from living in the country, and from sheer physical exhaustion did not expect to be phased by his neighbors’ cries.

Yet he found himself wondering “Is this man prepared for death? That’s really all that matters now. Am I?” He knew his best friend, Jacob Eames, who convinced him into becoming a diest would have thought his midnight worries were ridiculous. During the night, the dying man became quiet. Adoniram knew that he had died. The whole inn was hushed the next morning. The inn-keeper said, “He’s dead” before Adoniram could even voice the question. Adoniram felt pity for the man, and asked, “Do you know who he was?”

James was more than distraught. His entire world was shaken to the core. “Lost. In death, James Eames was lost – utterly, irrevocably lost. Lost to his friends, to the world, to the future. Lost as a puff of smoke is lost in the infinity of air. If Eame’s own views were true, neither his life nor his death had any meaning… But suppose Eames had been mistaken? Suppose the Scriptures were literally true and a personal God real? … For that hell should open in that country inn and snatch Jacob Eames, [my] dearest friend and guide, from the next bed – this could not, simply could not be coincidence.” Shortly thereafter Adoniram is converted. And he becomes the first foreign missionary from America.

His story of trying to travel to England to find financial support for missions was fascinating. His ship was taken over by pirates! It was fascinating reading about how he got out of the ship’s prison and escaped the prison in France. Then, Adoniram had to hide with an American woman who lived there. She and her household attended boisterous and crude social events. Adoniram had to go along, while he was in hiding waiting on a ship. “Finally, however, revulsion overcame his curiosity. ‘the last place of amusement he visited was a masked ball; and here his strong feelings quite overcame his caution, and he burst forth in his real character. He declared to his somewhat startled companions that he did not believe the infernal regions could furnish more complete specimens of depravity than there beheld.’ He did not stop there, but went on – in English – to enumerate ‘many of the evils which showed the only way of escape from these evils – the despised, but truly ennobling religion of Jesus Christ.’ Carried away, he spoke louder and louder until he attracted a good-sized audience. Most of the guests, not understanding his language, thought his performance was part of the show. But a fair number, though their faces were concealed by masks, showed by their behavior that they understood, and were sung as he voiced his disgust at the behavior of men who were undoubtedly American men in disguise.”

Another fun moment was when Adoniram was studying baptism. On his journey to India, he told Nancy, “I fear the Baptists are right.” At first, Nancy was quite upset about this. She was bound and determined to not become a Baptist.  They were sent out as Congregationalists, supported by the Congregationalist churches. She felt it would be a betrayal. Adoniram was patient and let her study the scriptures on her own – and she too could not find scriptural support for paedobaptism and became convinced of the necessity of credobaptism.

The author did a phenomenal job at describing Burma. The lush landscape and the beautiful people with their colorful culture comes alive in these pages. You can almost feel the mud between your toes.

The only weaknesses were in the timing of the book. It felt like after Nancy’s death, the book sped up much more rapidly. But, also it felt like Adoniram buried a part of himself and never quite recovered. While he does find a love for his next two wives, there does not seem to be the same type of devotion or adoration as with Nancy. Adoniram seems to go a little mad after her death. His personality completely changes. It was difficult to continue reading after that part, because he was so changed. This isn’t the fault of the author – it is just a sad thing to experience even in reading.

I cannot recommend this book enough. Not only is it beautifully written – but it encourages the reader to continue with the task that God has written for him. It also creates such a sense of gratefulness for what the great men and women of faith before us have done.

“I wish you believe, not for my profit, but for yours. I daily pray the true God give you light, that you may believe. Whether you will ever believe in this world I do not know, but when you die I know you will believe what I now say. You will then appear before God you now deny.”

“I felt resolved to give up every thing, and seek to be reconciled to God. That fear, which I had ever felt, that others would know I was serious, now vanished away, and I was willing that the whole universe should know that I felt myself lost and perishing sinner.”