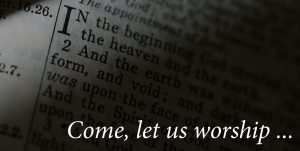 Scripture uses many terms to describe followers of Christ.

But a fundamental description of Christians is also one that rightly applies to all humans.  We are, each and every one of us, worshipers.  It is a foundational feature of our nature as divine image-bearers.  Since the Edenic expulsion of our first parents, when we witness the engagement of God with the second generation of our forebears, we see that the duty of worship did not cease with Adam’s sin, though it would suffer perpetually in all men since the Fall.  Cain slew Abel over an issue borne of worship.

That innate need to worship within each human, and the eternity threatening effects of unacceptable or misdirected worship because of our sin, is seen over and over again in the progressive revelation of Scripture.  In His Ten Commandments, God forbids “graven images” precisely because He has already placed His image bearers, man, in the world.  As bearers of His image, we are not, of course, to worship ourselves, but are rightly to reflect and worship Him whose image we bear.  As Paul tells the Corinthians, “You are not your own” (1 Corinthians 6:19).

In light of who we are, then, as 21st century Christians, and as image-bearers designed to worship, it is of absolute importance that we rightly orient our worship to the One who alone deserves it and commands it.

It’s instructive for us (for many reasons) to study the interaction of Jesus with His twelve disciples recounted for us in Matthew 16.  Jesus asks the question, “Who do the people say that the Son of Man is?” (Matthew 16:13)  Our Lord, who “knew all men” (John 2:24) did not posit this question because He didn’t know the answers.  He did it to elicit and affirm for the twelve – and for us – the forthcoming glorious profession of Peter: “You are the Christ, the Son of the living God” (Matthew 16:16).

While Peter’s confession would be the “rock” upon which Jesus would “build My church,” the incorrect answers our Lord received before Peter’s acceptable response might seem shocking.  “Some say John the Baptist; and others Elijah; but still others, Jeremiah, or one of the prophets” (Matthew 16:14).

While Jesus wasn’t surprised at these answers, it might leave us befuddled.  Consider the wrong responses in light of  Jesus’ report to the imprisoned and soon-to-be martyred John the Baptist and our incredulity might seem legitimate.  “Go and report to John what you hear and see: the blind receive sight and the lame walk, the lepers are cleansed and the deaf hear, the dead are raised up, and the poor have the gospel preached to them” (Matthew 11:4-5).

How could those who lived with, walked along, listened to, and talked with Jesus not have known His true identity?  The signs and wonders pointed directly to His deity (John 14:11).  Over and above the miracles was the authoritative and incisive wisdom of His teaching.  Even during His youthful attendance at the temple, “all who heard Him were amazed at His understanding and His answers” (Luke 2:47).  The wonder of the Jewish people at His teaching only increased throughout His ministry (see, for example, Matthew 7:28, Matthew 13:54, Mark 1:22, Mark 1:27, Mark 6:2, Luke 4:22, Luke 4:36).  Even the man who would finally accede to the demands of the Jews for His crucifixion, the Roman governor Pilate, would be amazed by Him (Matthew 27:14, Mark 15:5).

It seems surprising that the testimony of Scripture points to the widespread failure of the religious Jewish people, amazed and astonished though they were, to recognize this profound, miracle-working man as the divine Messiah – after all, merely a pittance of 120 souls, out the thousands who thronged after Jesus, were faithfully gathered after His crucifixion, resurrection, and ascension in that Pentecost upper room (Acts 2).

Perhaps then we should temper our critique in light of our own failures to rightly apprehend Him.  Idealistically we think that we would never misidentify the Lord, had we the 1st century benefit of sandals-on-the-ground following around the amazing Jesus.  But would we not have been like those masses who followed merely for the temporal benefits of miracles (John 6:26) only to largely dismiss the eternal gravity of His teaching? (John 6:66)

In the arrogance of our enlightened hindsight, we fail to realize that a vast majority of Christendom today, like those 1st century miracle-craving but truth-dismissing Jews, also don’t recognize the genuine, biblical Jesus.  Evangelicalism today is replete with any and every sort of “Jesus.”  Unbiblical notions of Him abound.  There’s Jesus your BFF; Jesus the social justice warrior;  and,  Jesus your personal cheerleader.  There’s  Jesus the dream-fulfillment deity; Jesus the really good teacher; and Jesus the divine mediator of personal mystical experience.  There’s even a twisted image of Jesus as a patriotic crusader for the American way, his cross draped in the billowing folds of Old Glory.  False Christs, Jesus warned us, would come (Matthew 24:24) and, while we don’t yet see many claiming for themselves the title of Messiah, we see – within the church itself – a proliferation of caricatured false Christs tolerated, promoted, coddled, and even worshiped.

Prior to the events of His death, burial, resurrection, and ascension, the Lord explained to the eleven, and by extension to us, why it was “to your advantage that I go away” (John 16:7).  The “Helper,” the Holy Spirit,  would come in His stead.  The ministry of the Holy Spirit includes, among other salvific functions, to glorify and point Christians to Jesus by illuminating to us the Holy Scripture.  Though Christ is no longer trodding the dusty trails of Judea, He is not unknown to us.  We have the promised blessing of the illuminating, indwelling Holy Spirit.  We also have the clear, complete, and closed canon of Scripture, the exclusive means through which the He points us to “the way, the truth, and the life” (John 14:6).

John Calvin discerningly said, “”Those, therefore, who set up a fictitious worship, merely worship and adore their own delirious fancies; indeed they would never dare to so trifle with God, had they not previously fashioned him after their own childish conceits.”  The question isn’t, then, whether we will worship.  We were created to worship.  The question is whether our worship be deliriously fictitious or biblically faithful.  For those who worship a self-crafted, distorted Jesus, the words of Paul demand sober contemplation, “Therefore, my beloved, flee from idolatry … I say that the things which the Gentiles sacrifice, they sacrifice to demons” (1 Corinthians 10:14-22).  An idol called Jesus is no less damning to worship than an idol called Dagon, and they, along with their errant, deceived worshipers, will be cast down. (1 Samuel 5:1-7; see also Revelation 12:7-10)

In our day, we may not confuse Jesus with Elijah or Jeremiah, but evangelicalism is replete with those who have “fashioned” a Jesus “after their own childish conceits,” driven and deluded by “their own delirious fancies.”  Perhaps it’s no surprise then that Jesus would ask, “When the Son of Man comes, will He find faith on earth?” (Luke 18:8)  Faith isn’t a mechanism of grace unless it is “the gift of God” (Ephesians 2:8) and is rightly founded on “the Christ, the Son of the living God” (Matthew 16:16)  for “no one comes to the Father but through” Him (John 14:6).

May our daily worship, and our Lord’s Day worship, be fixed on – and exalt – the genuine Jesus.  May we pray the Spirit’s aid in illuminating the saving and sanctifying  truth of holy Scripture about Him.  May we seek in our lives the realization of Paul’s intercession for the Colossians: “…that you may be filled with the knowledge of His will in all spiritual wisdom and understanding, so that you will walk in a manner worthy of the Lord, to please Him in all respects …” (Colossians 1:9-12).  Above all, may we shun the idolatrous Jesuses of our “delirious fancies” and “childish conceits” and worship Him only Who is exalted in the Word and by the Father.

“For this reason also, God highly exalted Him, and bestowed on Him the name which is above every name, so that at the name of Jesus every knee will bow, of those who are in heaven and on earth and under the earth, and that every tongue will confess that Jesus Christ is Lord, to the glory of the Father.”  Philippians 2:9-11

May our Lord’s Day worship bless, honor, and praise the Lord, “For from Him and through Him and to Him are all things.  To Him be the glory forever.  Amen.” (Romans 11:36