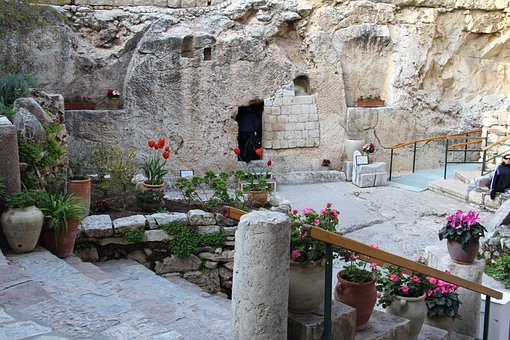 Now while they were on their way, some of the guard came into the city and reported to the chief priests all that had happened (Matthew 28: 11 NASB 1995).

I think Justin Peters’ ministry is an excellent ministry blessed by God. I cannot think of anyone doing a better job at demonstrating proper biblical hermeneutics by exposing false teachers through common sense and the Word of God. One thing he points out is the “miracles” of these false teachers are demonstrably hoaxes, and the extraordinary “miracles” they claim to perform have no verifiable witnesses. He says several times these “miracle workers” never seem to have a smart phone when these events seem to happen.

That is not the case for Jesus’ miracles. They were public, falsifiable, and impossible to disprove. The same is true for His resurrection. It wasn’t some smoke and mirrors performed by extraordinary magicians. It was public, undeniable, and uncoverable. We will look at the events which surrounded the resurrection to see how this is the case.

Jesus publicly claimed he would raise from the dead:

The news of Jesus’ prophesy that he would be crucified and rise from the dead was widespread. It was enough to scare the religious leaders into setting up a guard of veteran soldiers to guard the tomb of Jesus for three days. Yet, this is just one of the events which show the authenticity of the resurrection.

Jesus’ death was a very public death. Every gospel account mentions it. Jesus was taken before Pilate, a public figure. He was publicly mocked by the religious leaders. He was put alongside a public road to Jerusalem on Golgotha. He was killed publicly by Roman soldiers. It was testified that everyone knew he was dead. He was even impaled in his side with a spear with blood and water flowing out to show his heart sack had ruptured (John 19: 34).

Jesus was dead. He did not faint. He was more dead than Jacob Marley, who was as dead as a doornail, because Jesus was real. No swoon theory can hold water. There is no way Jesus could scientifically have revived from death in a tomb.

Every account in the gospels mentions the tomb Jesus was laid in. There was no question as to what happened to Jesus’ body after he died. Every account mentions Jesus was placed in the tomb of the public figure of Joseph of Arimathea. He was a public member of the Sanhedrin, the legal counsel of the Jews. He was anointed with spices from another public figure from the Sanhedrin, Nicodemus (John 19:39). It was so public, Pilate knew where he was buried, and the religious leaders knew.

The next day, that is, after the day of Preparation, the chief priests and the Pharisees gathered before Pilate and said, “Sir, we remember how that impostor said, while he was still alive, ‘After three days I will rise.’ Therefore order the tomb to be made secure until the third day, lest his disciples go and steal him away and tell the people, ‘He has risen from the dead,’ and the last fraud will be worse than the first.” Pilate said to them, “You have a guard of soldiers. Go, make it as secure as you can.” So they went and made the tomb secure by sealing the stone and setting a guard (Matthew 27: 62 – 66, ESV).

Jesus’ burial place could not have been more public. There was no way to go to the wrong tomb to lose the body. Everyone knew if there was an empty tomb or not. Yet, the last piece of evidence puts the last nail in the coffin, so to speak, in the rest of the alternative theories, and it rolls the stone away for the resurrection event.

Jesus’ body was missing from the empty tomb on Sunday morning. Here is Matthew’s account:

And behold, there was a great earthquake, for an angel of the Lord descended from heaven and came and rolled back the stone and sat on it. His appearance was like lightning, and his clothing white as snow. And for fear of him the guards trembled and became like dead men (Matthew 28: 2 – 4, ESV).

Jesus’ tomb was empty. The guards had fled. The women who loved Jesus came to the tomb saw the same angle who scared the guards away and reported what happened to the disciples (vv. 1, 5 – 8). The women also got to meet and speak with Jesus as well as get directions from him on going the tell the brothers to go to Galilee (vv. 8 – 10).

The guards also shared the vision of the earthquake, the angles, and the empty tomb to the Pharisees:

While they were going, behold, some of the guard went into the city and told the chief priests all that had taken place. And when they had assembled with the elders and taken counsel, they gave a sufficient sum of money to the soldiers and said, “Tell people, ‘His disciples came by night and stole him away while we were asleep.’ And if this comes to the governor’s ears, we will satisfy him and keep you out of trouble.” So they took the money and did as they were directed. And this story has been spread among the Jews to this day (Matthew 28: 11 – 15, ESV).

Instead of believing the report, the religious leaders tried to cover it up with a stupid lie. It is a ridiculous lie. How would the soldiers know it was the disciples who stole the body if they were asleep? Why would veteran soldiers sleep on duty when they would be killed for doing so? Since there was a public earthquake, wouldn’t it have woken them up? Yet, the religious leaders chose this lie because their hearts were hard and could not accept the truth and lose their power.

It still bothers me the religious leaders would not accept the truth with the insurmountable evidence Jesus was the Messiah. Yet, I think Jesus makes the most sense of this in his parable of Lazarus and the rich man:

And he said, ‘Then I beg you, father, to send him to my father’s house— for I have five brothers—so that he may warn them, lest they also come into this place of torment.’ But Abraham said, ‘They have Moses and the Prophets; let them hear them.’ And he said, ‘No, father Abraham, but if someone goes to them from the dead, they will repent.’ He said to him, ‘If they do not hear Moses and the Prophets, neither will they be convinced if someone should rise from the dead’” (Luke 16: 27 – 31, ESV).

While the religious leaders studied the scriptures, they did not recognize the messiah when he performed countless public miracles, fulfilled hundreds of prophesies which were foretold hundreds and thousands of years beforehand, and raised the dead (Matthew 27, John 11).

They committed the unpardonable sin of equating the miracles of Jesus by the power of the Holy Spirit with the works of Satan (Matthew 12: 22 – 32). So, Jesus said they would die in their sin (John 8: 21 – 24). They proved themselves unworthy to be Jesus’ witnesses.

Who were the public witnesses Jesus chose? Jesus first chose women, who could not testify in a court of law. Then Jesus chose fishermen, a traitor tax collector, a terrorist, and simple uneducated men to witness his new life. Finally, Jesus chose his brothers who did not believe in him at first, and Saul who was brutally killing Jesus’ followers. Each of these witnesses were persecuted and died for what they claimed to have seen. They had no positive reason to make it up and everything to lose if they did. They could have not hallucinated because over five hundred people saw him risen from the dead. No person can share a hallucination with another. This has to be true.

There is a lot that can be taken away from these facts. Jesus really rose from the dead beyond the shadow of a doubt, you really need to check out Justin Peter’s ministry at justinpeters.org, and false teachers cannot reproduce the public miracles of Jesus. You can really trust that Jesus publicly rose from the dead.

If you do not believe it, I think it is something other than evidence which holds you back. You probably have a hard heart like the religious leaders. You do not want to give up your power, prestige, or sin. You know that if you repent and trust in Jesus you will have to give up lying, lust, pornography, sexual immorality, covetousness, drunkenness, homosexuality, etc.

I promise you if you turn from your sin and trust in Jesus, you will find something sweeter than sin. You will be free of all of your guilt, shame, and the power of sin which holds you back. You will have a new relationship with God, the Holy Spirit will live inside you, and you will have the ultimate peace, knowing God is working all things together for your good to be like Jesus. Yes, sin has its thrills; however, you know it brings sorrow and death, unless you have a hard conscience. Jesus will completely forgive you of your sin if you repent and trust in Him today. Do not put it off until tomorrow; because, you do not know when you will die and be swept into judgement and eternity.

If you do not know Christ, I am praying with tears for you that you will repent. Hell is not a place where you get to hang out with your wicked friends. It is a place of eternal conscience torment under God’s wrath. This is what you and I deserve; however, God is willing to show grace to the sinner who repents. Consider my motives, I have nothing to gain from telling you this. I do not make money or prestige from your conversion. All I want is for you to be snatched out of the fire. May God have mercy on your soul.