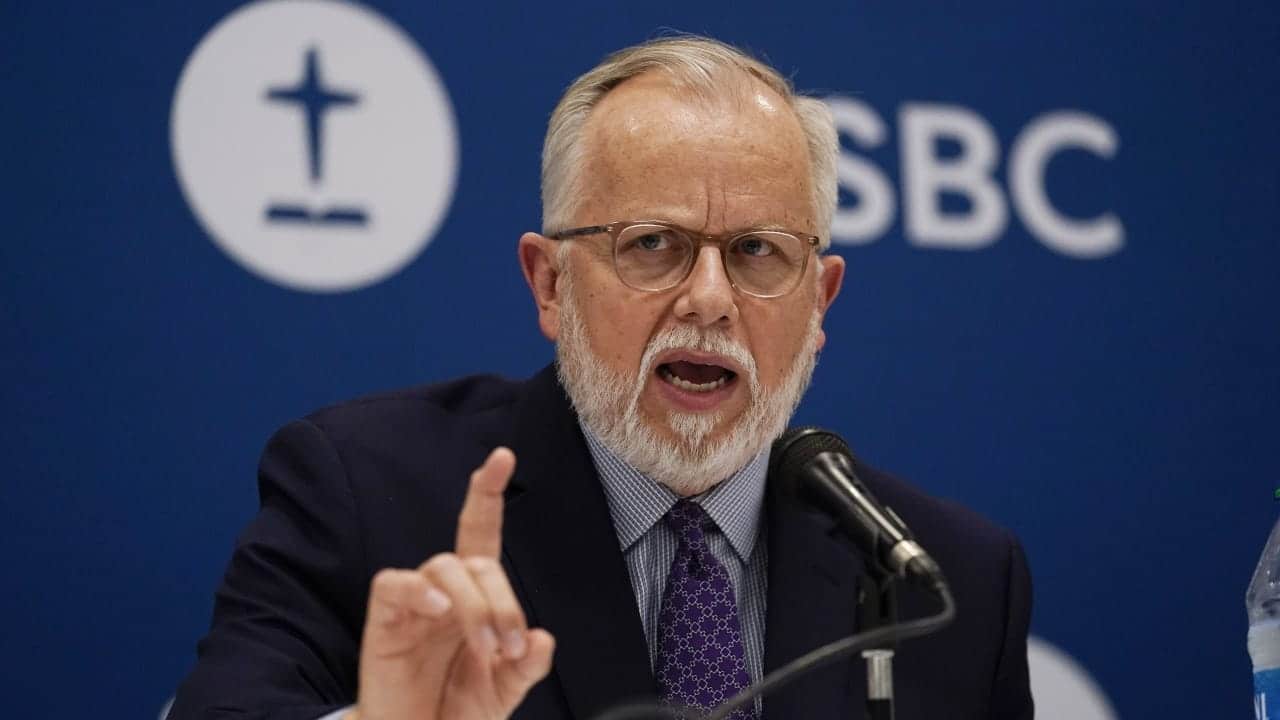 In January 2020, the now newly elected Southern Baptist Convention President, Ed Litton, preached a sermon to his Redemption Church congregation in Saraland, AL.  The sermon was based on the text from Romans 1:24-32.

24 Therefore God gave them up to vile impurity in the lusts of their hearts, so that their bodies would be dishonored among them. 25 For they exchanged the truth of God for falsehood, and worshiped and served the creature rather than the Creator, who is blessed forever. Amen.  26 For this reason God gave them over to degrading passions; for their women exchanged natural relations for that which is contrary to nature, 27 and likewise the men, too, abandoned natural relations with women and burned in their desire toward one another, males with males committing shameful acts and receiving in their own persons the due penalty of their error.  28 And just as they did not see fit to acknowledge God, God gave them up to a depraved mind, to do those things that are not proper, 29 people having been filled with all unrighteousness, wickedness, greed, and evil; full of envy, murder, strife, deceit, and malice; they are gossips,  30 slanderers, haters of God, insolent, arrogant, boastful, inventors of evil, disobedient to parents, 31 without understanding, untrustworthy, unfeeling, and unmerciful; 32 and although they know the ordinance of God, that those who practice such things are worthy of death, they not only do the same, but also approve of those who practice them.

In the course of his sermon, Litton made a biblically noxious statement which sounded uncannily like a sermonic echo.  Here’s what he stated:

“In the Bible, sexual sin is whispered, compared to the shout God makes about greed and judgmentalism.”  Ed Litton 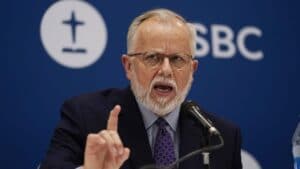 Biblically noxious though it was, this comment didn’t merely sound like an echo.  It was an echo because exactly one year earlier, in January 2019, the immediate past President of the SBC, J.D. Greear, also preached on the same text of Scripture.  Greear also made a statement that is repeated almost verbatim by Litton.

“[Wilkin’s quote] ‘We ought to whisper about what the Bible whispers about, and we ought to shout about what it shouts about.’  [Greear’s addendum] And the Bible appears more to whisper when it comes to sexual sin compared to its shouts about materialism and religious pride.”  J.D. Greear

As indicated in the citation above from Greear, a portion of his words were quoting Jen Wilkin, a Bible study writer, blogger, and conference speaker from Matt Chandler’s The Village Church.  Worth noting is that the immensely helpful Michelle Lesley has an entry on her website that, while not calling Wilkin a false teacher, does mark her as “not recommended” as a sound resource.

For the moment, let’s put aside the issue of the astonishing similarity of the two respective quotes and deal with their content.

Both pastors assert that God merely “whispers” at sexual sin.  They make this assertion specifically from the selected Romans 1 text.  Are they accurate in stating that in this text God is simply whispering about sexual sin, but is shouting about greed (materialism) and judgmentalism (religious pride)?

Take a moment and read the text yourself.  Nearly half of it speaks directly to the matter of sexual sin as it relates specifically to the “giving them over” judgment of God.  In judging those rebellious sinners who, according to Rom. 1:25 had “exchanged the truth about God for a lie and worshiped and served the creature rather than the Creator,” God first gives them up to “dishonorable passions” (Rom 1:26A).  These “dishonorable passions” are explained by Paul in Rom. 1:26B-27 as homosexuality.  The remainder of the text denotes the spiraling judgment of God that has begun with sexual sin and is finalized with a debased mind.

Unless one temporarily suspends the use of logic-inducing neurons, what the Scripture speaks here in regards to sexual sin could hardly be construed as whispering.  We are specifically being told that sexual sin is a marker that, having once been given over to it by God in sovereign judgment, leads ultimately to a debased mind, a mind incapable of rational thought.  It is precisely a debased mind which is currently being played out in the culture at large with the mass delusion of transgenderism.

However, what Litton seems to have swiped from Greear with this explanation might still prompt the question as to whether it’s unfair to say that God isn’t actually whispering.  After all, this is only one part of one chapter of one book of Scripture.  Maybe God is in fact whispering if this is all there is.

It isn’t all there is.  We can turn elsewhere in Scripture to find a bit more about God’s inscripturated tone and volume on the matter.  We could go to 1 Corinthians 6:18 which pithily and pointedly and in a most unwhisperlike fashion states, “Flee immorality.”

If that clear Corinthian apostolic command isn’t sufficient, one could turn elsewhere in the Pauline epistles where he enumerates specific sins.  Look at 1 Corinthians 6:9-10, Galatians 5:19-21, or Colossians 3:5-6.  Notice that in those lists sexual immorality pops up right at the front of the list.  The matter of homosexuality is dealt with elsewhere in Scripture as well.  Genesis 19, Leviticus 18:22, Ephesians 5, 1 Timothy 1, and Jude 7 all contain inspired words from God about sexual sin.  When God uses the word “abomination” about sin, rest assured, He isn’t whispering.

The matter of sexual sin is distinct in Scripture.  But the one place where it is perhaps most vitally asserted is 1 Thessalonians 4:3.  In discussing a life that is pleasing to God, the apostle Paul points out that God’s will for the believer is his or her sanctification.  In this text, the apostle specifically frames sanctification against the backdrop of sexual sin.  “For this is the will of God, your sanctification: that you abstain from sexual immorality.”  It is rather more than a whisper.  It is, in fact, a Spirit-inspired, apostolic command.  It isn’t figuratively whispered; it’s divinely declared.

Frankly, an avowed atheist in the pulpit would be less dangerous to Scripture and to the congregation than either of these men on this issue.  This downplaying of sexual sin by both Greear and Litton indicate a number of things.

First it signals how tentative the SBC seems to be in dealing with the pronounced cultural narrative of the LGBTQ movement.  Though each pastor defines sexual sin as sin, by qualifying God as “whispering” about it they are necessarily and intentionally diminishing its abominable status in His eyes.  Sinners do not need help in rationalizing their sins to themselves, and they certainly do not need the pastoral persusion that it’s just not as big a deal to God since, after all, He only “whispers” about it.  Sinners need not be coddled in their sin, but compelled to repentance.

Secondly, it signals the foreboding consideration that, just as mainline denominations have and are doing, the SBC might find itself being positioned by its leadership to accept what it possibly seems to view as ecclesiastically inevitable: the acceptance of “gay” Christianity.  While this would certainly be an untenable agenda at the moment, duplicated sermons such as Greear’s and Litton’s which obscure the severity of sexual sin might help a narrative that leads to eventual acceptance.

If Scripture Says It Once, It Isn’t Whispering, It’s Enough

Finally, what Greear and Litton have exhibited is contrary to what they profess.  The Baptist Faith & Message, in its first article, states that “all Scripture is totally true and trustworthy,” and that it is “without any mixture of error.”  According to what these two SBC Presidents have preached, however, Scripture actually is not without mixture of emphasis.

The concept of verbal, plenary inspiration finds itself disparaged under the exemplified messaging of Greear and Litton.  The words of Scripture (verbal) are absolute and authoritative (plenary) because they are sovereignly directed (inspiration).  If it is in Scripture, it’s apparent tone or apparent frequency does not negate or diminish its divine importance.  How many times does God need to speak and in what voluminous textual tone must He do it for it to matter?

What these two men have done is akin to what the liberal “red letter Christian” movement employs, giving more emphasis to the “red letters” that denote what Jesus spoke than to the rest of Scripture.  It must not go without notice either that the formal movement of Red Letter Christians, under the direction of Tony Campolo and Shane Claiborne, is a vigorous promotion arm for the popular cultural concepts of social justice and racial reconciliation.  (see this episode of the Rapp Report podcast for more on red letter Christianity.) A recent blog post was titled, “De-Creating Whiteness.”

What Greear and Litton have done with their “whispering” sermons is produce a narrative that remarkably corresponds, in regard to sexual behavior, with what is being done under the auspices of critical theory with race.  Scripture is being nuanced to fit a narrative.

Is God Whispering About The SBC’s Sexual Abuse Scandal Too?

A final observation, in the form of a question: If God merely “whispers” about sexual sin, why then is the sexual abuse scandal of the SBC a continuing, problematic matter for the denomination?  Why are independent investigators being hired by its Executive Committee and intra-denominational task forces being convened to investigate sexual abuse if such sin is merely “whispered” by God?  The behavior of sin exhibited in the ongoing scandal seems surely to contradict the doctrine being taught by these two Presidents.  Sexual sin is lethal.  It is lethal spiritually, personally, societally, and, as we’re witnessing in the SBC, denominationally.  It is not a thing about which God whispers.

Is Sermonic Swiping A Fruit Of The Spirit?  Now, About That Sermonic Similarity.

There’s one other matter that is noteworthy.  As stated earlier, Greear preached his sermon in January 2019.  Litton preached

Now, observe for yourself from this sermon mashup video.

“Therefore behold, I am against the prophets,” declares the LORD, “who steal My words from each other.”  Jeremiah 23:30

One noticeable difference prompts a particular question.  With regards to the anecdotal pagan temple story, Litton attributes it to a book by Paul David Tripp while Greear attributes it to himself.  Which is it?

Did Ed Litton plagiarize J.D. Greear’s sermon?  Did J.D. Greear eisegete himself into a story that actually came from Tripp?  What’s going on here?  These are two SBC presidents who have preached themselves into a ignoble and suspicious sermonic corner.  Who is writing their sermons?  Who is doing their study?  Are these men merely well-tuned orators reading from the same script written by anonymous? Is there some SBC sermon-scripting service employed by both men?  Will there be a task-force or third party investigation by the SBC on the matter?  Does integrity in this matter, matter?

The SBC, and evangelicalism at large, needs to know just what’s going on.  We can be sure that the day will come when the Lord Himself will not whisper about such things.

“There is no use in mincing matters: there are thousands of us in all denominations who believe that many ministers have seriously departed from the truths of the gospel, and that a sad decline of spiritual life is manifest in many churches.”

For another look at the Litton – Greear Sermons on Homosexuality, check out Elizabeth Prata’s article HERE.