Written by Striving for Eternity 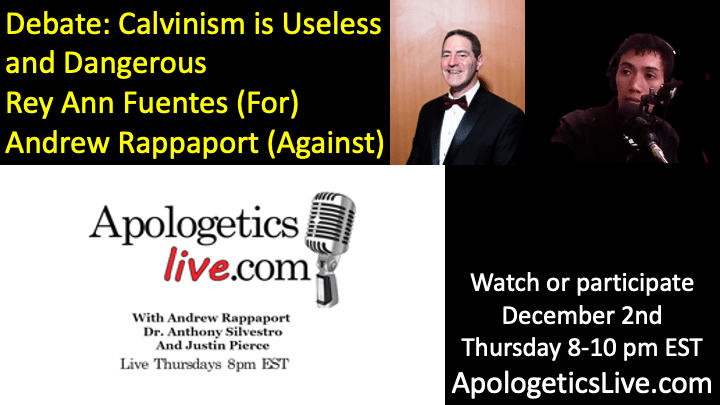 On the Apologetics Live show, Andrew Rappaport debated RA Fuentes on the topic of Calvinism is Useless and Dangerous. Before, during, and after the debate, Fuentes made many claims that need to be clarified. We have nothing to hide. Therefore, we are releasing all the communication between Andrew Rappaport and RA Fuentes. These messages will reveal the lies that he has been telling people.

Prior to the Debate

You will read how Mr. RA Fuentes continued to try to get out of the debate but make it look like it was Andrew Rappaport being a coward and trying to get out of it. At least four times Andrew had to explain that he was doing the show with or without Fuentes. That does not sound like Andrew wanted out of the debate. At one point Fuentes actually blocked Andrew and then took to social media claiming that Andrew blocked him and was too scared to debate. Andrew released all their communications to that point to expose that lie. You can read all those messages below. You will see that Fuentes blocked Andrew and then tried to claim that Andrew asked to be blocked.

One of the biggest issues before the debate was the fact that Mr. RA Fuentes refused to define his terms. This is standard in a pre-debate so that time is not wasted talking past one another. The communication revealed that Fuentes did not understand what Calvinism actually is and the debate exposed that as well. An experienced debater would have expected to define his terms, but Mr. RA Fuentes somehow thought that was giving away his strategy. The understanding of the topic one is debating is necessary for a debate and the very reason that Dr. James White refused to debate Mr. RA Fuentes. Mr. RA Fuentes admits that he used ad hominem attacks on Andrew but justifies it by saying that it was ok because it was not during the debate. It is interesting that Fuentes accuses Andrew of doing what he admitted to doing himself. This is a common pattern with Mr. RA Fuentes. Reading the messages you will see that Fuentes tried to get out of the debate but blame it on Andrew, projecting his behavior onto Andrew. He does the same with claims of ad hominems, strawman arguments, lying, and more. This is one of the character issues with Mr. RA Fuentes, he is quick to accuse others of doing what he is actually doing.

The debate was a sad display of a person who did not understand the topic of debate and was using continuous logical fallacies throughout. Andrew had to continue to point out the numerous logical fallacies of Mr. RA Fuentes. In fact, a post from his after the debate displays his constant confusion, either by ignorance or purpose. He continued to claim that teach TULIP is Calvinism and even though Andrew corrected him several times he ignored it. This is the sign that Fuentes prefers a monologue rather than listening and having a dialogue. Andrew corrected this several times and explained that teaching TULIP is not necessary to the gospel message but the teaching of Calvinism is the gospel. Notice how in his post-debate post he continues with his strawman argument confusing Calvinism and teaching TULIP. During Andrew’s closing five minutes, he took the time to expose Mr. RA Fuentes and why no one should be debating him. Fuentes has claimed that Andrew was making personal attacks. However, to date not one of Fuentes support nor he himself can show a single thing that Andrew stated was false. Andrew stated that several people contacted him claiming that Fuentes was not a pastor and had problems at his last church.

Clearly, Andrew was contacted with this information. Andrew did try to contact the pastor. However, he stopped communicating once he understand that Andrew wanted to talk about Mr. RA Fuentes. Post-debate Fuentes has used that to claim that the pastor supports him and that he had no issues. That is anything but true. All that reveals is that the pastor stopped communicating. That is not a sign of support nor criticism.

Mr. RA Fuentes asked for the mediator to close in prayer and yet when it came time to do that he pulled his ears buds out of his ear and refused to listen. He put them back in once the prayer was over and Andrew and Justin opened their eyes. He has claimed that he was talking to someone. However, if you watch that section of the video his mouth was not moving.

Other Resources on the Debate

All the communications between Andrew Rappaport and RA Fuentes