The Father Is Seeking Such People

An Hour Is Coming

In my last article, I discussed being a truly spiritual person. Many people these days claim that they are spiritual. They make this claim apart from Christ. I recently witnessed this first hand in New York City as I was in Union Square with a group of brothers in Christ preaching the gospel. In many of the conversations, I had most people claimed they were spiritual. Some claimed they were Christian but when pressed they did not show a knowledge of the gospel or of Christ.

As Jesus was having a talk with a Samaritan woman at the well, a discussion of worship, some might say a spiritual conversation occurred. The women perceived that Jesus was a prophet after He called her out on her sin. She tried to turn the conversation from sin and basically asked, my paraphrase, “where is the right place to worship? This mountain? Jerusalem?” She was hung up on the place. In fact, she was hung up on the physical from the start of this conversation.

Jesus Asks Her For A Drink 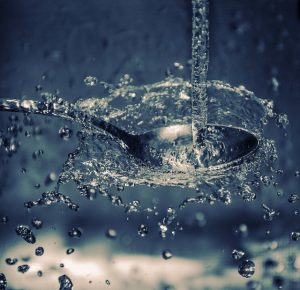 When Jesus asks her for a drink she answers in vs 9:

Immediately she points out a physical difference. Jesus was a Jew and she was not. She was a Samaritan. These two groups of people usually did not associate with one another. The Samaritans were considered as halfbreeds, not fully part of the Jews. They had their own place and way of worship. This is why she found it strange, not only that a man was talking to her, but a Jew. She was focused on the physical appearance of Jesus. He rebukes her and says in vs 10:

“If you knew the gift of God, and who it is who says to you, ‘Give Me a drink,’ you would have asked Him, and He would have given you living water.” John 3:10

How is she to know who He is? How could she see from just looking at Him? Jesus had nothing in His hands. He had no pale. He didn’t even have a cup. The woman sees this physical lack and states in verses 11-12

“Sir, You have nothing to draw with and the well is deep; where then do You get that living water? You are not greater than our father Jacob, are You, who gave us the well, and drank of it himself and his sons and his cattle?” John 13:11-12

This woman is still blind to Who she is speaking with. This Jewish man speaking with her is just a man. She did not yet see Who He is because she is still in the flesh. 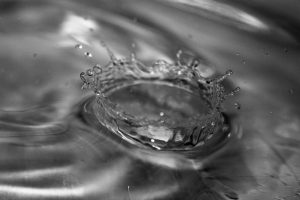 The woman said to Him, “Sir, give me this water, so I will not be thirsty nor come all the way here to draw.” John 4:15

Jesus calls out her sin. She has been going at this time of day to this well for water because she is in sin. She is a woman of ill repute. She is an adulterer. Jesus knows this and calls her out. He knew this before He sat down to talk to her yet He talked to her anyway. And she didn’t see Who He was. Not until He called out her sin did she begin to perceive Who this man truly was. Then she changed the conversation from her sin back to a question of the physical.

The woman said to Him, “Sir, I perceive that You are a prophet. Our fathers worshiped in this mountain, and you people say that in Jerusalem is the place where men ought to worship.” John 4:19-20

She recognizes that this man speaking to her knows about her. This Jew, who should not be talking to her must be a prophet. He knows about her life. He could not know unless He had the ability to know these things. Yet, she changes the subject to a question of where to physically worship.

Jesus said to her, “Woman, believe Me, an hour is coming when neither in this mountain nor in Jerusalem will you worship the Father. You worship what you do not know; we worship what we know, for salvation is from the Jews. But an hour is coming, and now is, when the true worshipers will worship the Father in spirit and truth; for such people the Father seeks to be His worshipers. God is spirit, and those who worship Him must worship in spirit and truth.” John 4:21-24 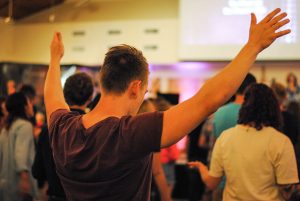 Where should we worship? Jesus says it is not a matter of where. It is a matter of worshipping in spirit and truth. What aspect of worshipping is “spirit”? It is not physical. It is, however, the Spirit that informs our truth. We can’t worship or know the truth without the Spirit. The Spirit must change our hearts and minds to know the truth. Our spirit will not worship rightly without the Holy Spirit regenerating our hearts. Until that happens we are in the flesh. We worship what we don’t know and know not how to worship. And if we do worship what we know, without the Holy Spirit, our worship is still in vain. We worship apart from salvation. The Father seeks His worshipers whom the Holy Spirit has caused to be born again to believe the truth.

The woman said to Him, “I know that Messiah is coming (He who is called Christ); when that One comes, He will declare all things to us.” Jesus said to her, “I who speak to you am He.”
So the woman left her waterpot, and went into the city and said to the men, “Come, see a man who told me all the things that I have done; this is not the Christ, is it?” They went out of the city, and were coming to Him. John 4:25-26,28-30

Jesus revealed Himself to this woman. He told this woman all she had done. He called her out on her sin. Yet, she went into the city and told everyone to come to see a man. Come see a man Who took her from seeing only the physical to seeing Who He is. Come see a man Who told her the Father is seeking those who worship in spirit and truth. We are not just to worship as a spiritual person. We are not just to worship what we don’t know. It is not just our spirit that will worship, but a spirit informed by the truth of Jesus Christ that regenerates us by the Holy Spirit of God.

May you know the gospel and know Christ. May you be regenerated to worship in spirit and truth. The Father is seeking such people.