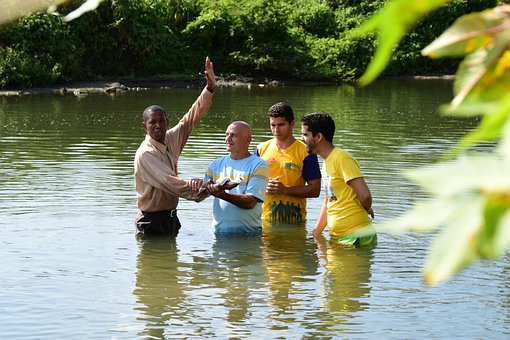 Something that stumped me when I went to St. Louis Christian College was the above verse. It radically challenged my belief that we are saved by grace through faith (Ephesians 2:8-9). While I knew that passages like Ephesians 1:13 – 14 show that Christians are sealed with the Holy Spirit when they believed, Acts 22:16 stumped me; that was until I learned Greek syntax, which we will discuss below.

Having already dealt with Acts 2:38, Norm Field’s fourth passage he uses to defend baptismal regeneration is Acts 22:16.[1] Again, this is a common passage baptismal regenerationists use to defend their view that baptism saves people. We will look at what the passage says in the Greek and the immediate context to determine the meaning of this verse.

We can see from the above the passage it looks like it could say baptism washes away sins. Yet, if we look at the punctuation, it looks like “wash away your sins” is modified by “calling on his name” (v. 16). This would be an accurate reading. Punctuation is put in by the translators for a reason. Here is what the passage looks like in the Greek: “καὶ νῦν τί μέλλεις ἀναστὰς βάπτισαι καὶ ἀπόλουσαι τὰς ἁμαρτίας σου ἐπικαλεσάμενος τὸ ὄνομα αὐτοῦ.”[2]

Ananias asks Paul why he waits to be baptized (v.16a). Then he gives the command to be baptized, “βάπτισαι,” which is in the aorist middle imperative. This is a command which is expected to be done immediately (v. 16b). The conjunction, “καὶ,” can mean “and” or “also” depending on the context. The conjunction can either be interpreted as joining the following phrase to the action of baptism or correlating the following phrase.

That following phrase is “ἀπόλουσαι τὰς ἁμαρτίας σου”, “wash away your sins” (v. 16c). The word “ἀπόλουσαι” is also in the aorist middle imperative which means it could either be in conjunction with baptism or correlated to baptism. Those two words make all the difference in theology. Either Paul had to be baptized to wash away his sins, or Paul had to do something else around the time of his baptism to wash away his sins. The fact “wash away” is a relative verb would cause a lot of confusion if the verse ended at this point.

The answer lies in the participle, “ἐπικαλεσάμενος,” “calling on”. The participle follows the relative verb “wash away” (v. 16d). It is also in the aorist middle, which matches “wash away,” “ἀπόλουσαι.” Also, it follows “wash away,” which means it is the verb that it modifies. This makes “ἐπικαλεσάμενος,” “calling on,” an article of means. In other words, the Greek grammar demands “wash away your sins” is done by “calling on the name of the Lord.” Baptism corresponds to this, however, calling on the name of the Lord washes away sins. Greek scholar Daniel B. Wallace says of the participle of means,

Paul spoke to a crowd after he was arrested for the false charge of bringing a Gentile into the temple (Acts 21: 27 – 40). After this, Paul told his testimony of being a Jew, persecuting Christians, and meeting the Lord Jesus Christ after the resurrection (22: 1 – 11). Then Paul tells the crowd how he was healed of blindness and how he was told he was chosen by God to know God’s will, see the risen Christ, and witness to everyone what he had experienced (vv. 12 – 15). After Ananias told Paul to be baptized and also wash away his sin by calling on Jesus’s name, Paul related how he was called to leave Jerusalem and preach to the nations (vv. 16 – 21).

It is clear Paul is summarizing his experience of salvation after seeing the risen Christ to people who are hostile to him. He did not have the time to give a long sermon on how to be saved. He was even stopped before he had the chance to explain further because he mentioned being called to preach to the Gentiles (v. 22). Yet, even in his short sermon, he said himself that he was saved by calling on the name of Jesus Christ (v. 16d).

One reason Ananias wanted Paul to be baptized at the same time of calling on the name of Christ was that was when one confessed their sin. John MacArthur does well at explaining the history of baptism:

Since both Paul and Ananias were Jewish, they would have understood the historical significance of baptism. The water was just a symbol to dying to the Gentile way of life to a new life to God. It happened alongside of repentance and symbolized repentance. Yet, baptism was never understood to bring salvation. This was obviously how it was used in John the Baptist’s ministry (Matthew 3: 11). And Paul would later teach that it symbolized the spiritual reality of Jesus’s death and resurrection so we could be dead to sin and alive to righteousness (Romans 6: 1 – 11). Water baptism only points to the spiritual reality of regeneration accomplished by the death and resurrection of Jesus Christ.

The above evidence is more than enough to prove Acts 22:16 is not the trump card baptismal regenerationists claim it is. It actually teaches calling on the name of the Lord is what washes away sin, not baptism. Baptism happens alongside salvation, but it is the calling on the name of the Lord that saves. To put it in perspective, it is the difference between heaven and hell if a man repents of his sin, trusts in Jesus, but gets hit by a truck on his way to be baptized.