Christmas: Christ Our Redeemer Has Come! 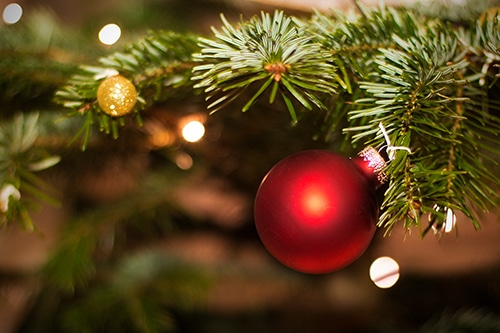 The months of November through January are a hectic blur. All the extra commitments on the calendar: parties, church socials, choir specials. Toys, lights, decorating a tree. Family gatherings – which frequently involves a bit of traveling. Even just shopping for weekly groceries seems so much more chaotic as many drivers on the road are “joyfully” full of “the Christmas spirit.” All of this makes it so difficult to keep the meaning of Christmas in the forefront of my mind. Rest. It’s what’s desperately needed. Not only bodily rest but also rest spiritually. A time to reflect on what it is that we are trying to celebrate amid the chaos.

“Christ Jesus, who, although He existed in the form of God, did not regard equality with God a thing to be grasped, but emptied Himself, taking the form of a bond-servant, and being made in the likeness of men. Being found in appearance as a man, He humbled Himself by becoming obedient to the point of death, even death on a cross. For this reason, also, God highly exalted Him, and bestowed on Him the name which is above every name, so that at the name of Jesus every knee will bow, of those who are in heaven and on earth and under the earth,  and that every tongue will confess that Jesus Christ is Lord, to the glory of God the Father.” Philippians 2:5b-11

This is what Christmas is all about. That God, the Creator of the heavens and the earth, the One who spoke the universe into existence wrapped Himself in flesh to come to the earth to ransom US. We who are nothing but vile sinners. We have done nothing that warrants this act of mercy. The only thing we are capable of is sin. Each sin is a treasonous crime against God Himself. Yet, He came to earth so that He could be the ultimate sacrifice on our behalf. His sacrifice being the payment for our crime so that we can stand innocent before the Lord.

“Christ is the visible image of the invisible God. He existed before anything was created and is supreme over all creation.” Colossians 1:15

Jesus existed in the form of God from eternity past. He is the Second Person of the Trinity. His “being”, His essential nature is God. His innate essence, His unchangeable state is God. This is why His name, Immanuel, is so significant. “God with us.” Because Jesus Christ is 100% God and 100% man. He is God wrapped in human flesh.

“The Son is the radiance of God’s glory and the exact representation of His nature, upholding all things by His powerful word. After He had provided purification for sins, He sat down at the right hand of the Majesty on High.” Hebrews 1:3

Equality with God was not something that He felt He needed to snatch away – because it already belonged to Him. He legitimately is God. It is His nature. Equality with God was not something that He felt He had to cling to either – because He willingly emptied Himself. To empty is to pour out until the contents are completely gone. Christ didn’t empty out his Deity – that’s His essence, He can’t do that – but He did empty Himself of His divine glory. His glory on earth was veiled for we are told in Isaiah 53 that He had no beauty that would draw men to Him. He was hated and scorned. He gave up everything all the treasures of Heaven for our sake. He set aside His Omniscience, His privileges, His personal authority, and the exercise of His will. Yet, He remained an exact image of God the Father. None of His deity was set aside.

He took on the form of a bond-servant. The Greek word here is Doulas, which literally means slave. The incarnate King of the Universe came down to earth to be the lowest form of humanity: a slave. He took off His kingly robes and put on the apron of a lowly servant. We can see this in Isaiah, where the Messiah is called the “servant of the Lord.”  He came to serve, by giving up everything. He came in total submission to the will of God the Father.

The incarnation is a complete mystery. How Jesus is 100% man and 100% God we can’t completely fathom. But we can believe it, because Scripture tells us it is true. Jesus is fully God and fully man. He is not merely God parading around wearing a human mask. He had to be both divine and human in order to accomplish God’s Work of Redemption. He had to be fully God in order to be completely sinless. And He had to be fully man in order to bear our sins on the cross and to face the same sort of trials and temptations that we face. He was hungry, He got sleepy, He grieved, He needed time away from people.  He dealt with all the same sorts of things that we face.

“God sent forth His Son, born of a woman, born under the law, to redeem those who were under the law, so that we might receive adoptions as sons.” Galatians 4:5

Christ coming to earth as our Redeemer is not “God’s Plan-B.” There was no “oops” moment for God back in the Garden of Eden. God’s ultimate purpose was not even fulfilled in Christ’s birth – but on the Cross. It was the death of Jesus that purchased our Redemption. God is perfectly Sovereign. He determines the times that each thing will happen. He sets the boundaries of human actions and appoints rulers too.

“For truly in this city, there were gathered together against Your holy servant Jesus, whom You anointed, both Herod and Pontius Pilate, along with the Gentiles and the people of Israel.” Acts 4:27

“But when the fullness of the time came, God sent forth His Son, born of a woman, born under the Law, so that He might redeem those who were under the Law, that we might receive the adoption as sons.” Galatians 4:4-5

“Also we have obtained an inheritance, having been predestined according to His purpose who works all things together after the counsel of His will,” Ephesians 1:11

“You… must be perfect, as your heavenly Father is perfect,” Matthew 5:48

True justice demands that every crime be punished. If a judge lets a criminal go, then the judge is unjust. And God is a perfectly just judge. He loves so purely that His love demands perfect justice. Every time we sin, we accumulate more guilt. God is obligated by His own justice to exact a penalty for each and every sin. We also lack the merit to stop sinning. In order for us to be acceptable to a perfectly holy and pure God, we must be obedient to 100% of His laws. And we just can’t. We lack the ability. We require the merit of righteousness. And we can’t be perfectly righteous. If we think we can, we are only fooling ourselves. The very best we can be is a “filthy garment” – which translates to a soiled menstrual rag.  We are constantly filled with self-seeking agendas and sinful pride.

“For all of us have become like one who is unclean, and all our righteous deeds are like a filthy garment; and all of us whither like a leaf, and our iniquities, like the wind, take us away,” Isaiah 64:6

“For the wisdom of this world is foolishness before God. For it is written, ‘He is the one who catches the wise in their craftiness,” 1 Corinthians 3:19

We needed a Redeemer. We stand before a Judge guilty. Our sentence for treason against the Holy Creator of the Universe is an eternity in Hell. But Jesus, being God in the flesh, who was completely perfect and righteous was able to be the sacrifice on our behalf. He paid our crimes debt. We can stand before God totally justified. Not only are we justified but He has imputed His righteousness on us, so that we now have a Righteous standing before God.  We are holy now, because He is Holy, and His blood has washed over us.

“He has sent me to proclaim release to the captives and recovering of sight to the blind, to set at liberty those who are oppressed.” Luke 4:18

“He is the image of the invisible God, the firstborn of all creation. For. . . all things have been created by Him and for Him. And He is before all things, and in Him all things hold together. He is also head of the body, the church; and He is the beginning, the firstborn from the dead; so that He Himself might come to have first place in everything. For it was the Father’s good pleasure for all the fullness to dwell in Him, and through Him to reconcile all things to Himself, having made peace through the blood of His cross.” Colossians 1:15-20

Christmas is not just little baby Jesus in the manger: it’s about Christ’s deity. The stable and manger were never intended to hide the fact that God had come into the world. Christ came to earth without forsaking His divine nature. To bear the wrath of God upon Himself so that we might be set free. Christmas is a time to celebrate, for our Redeemer has come.