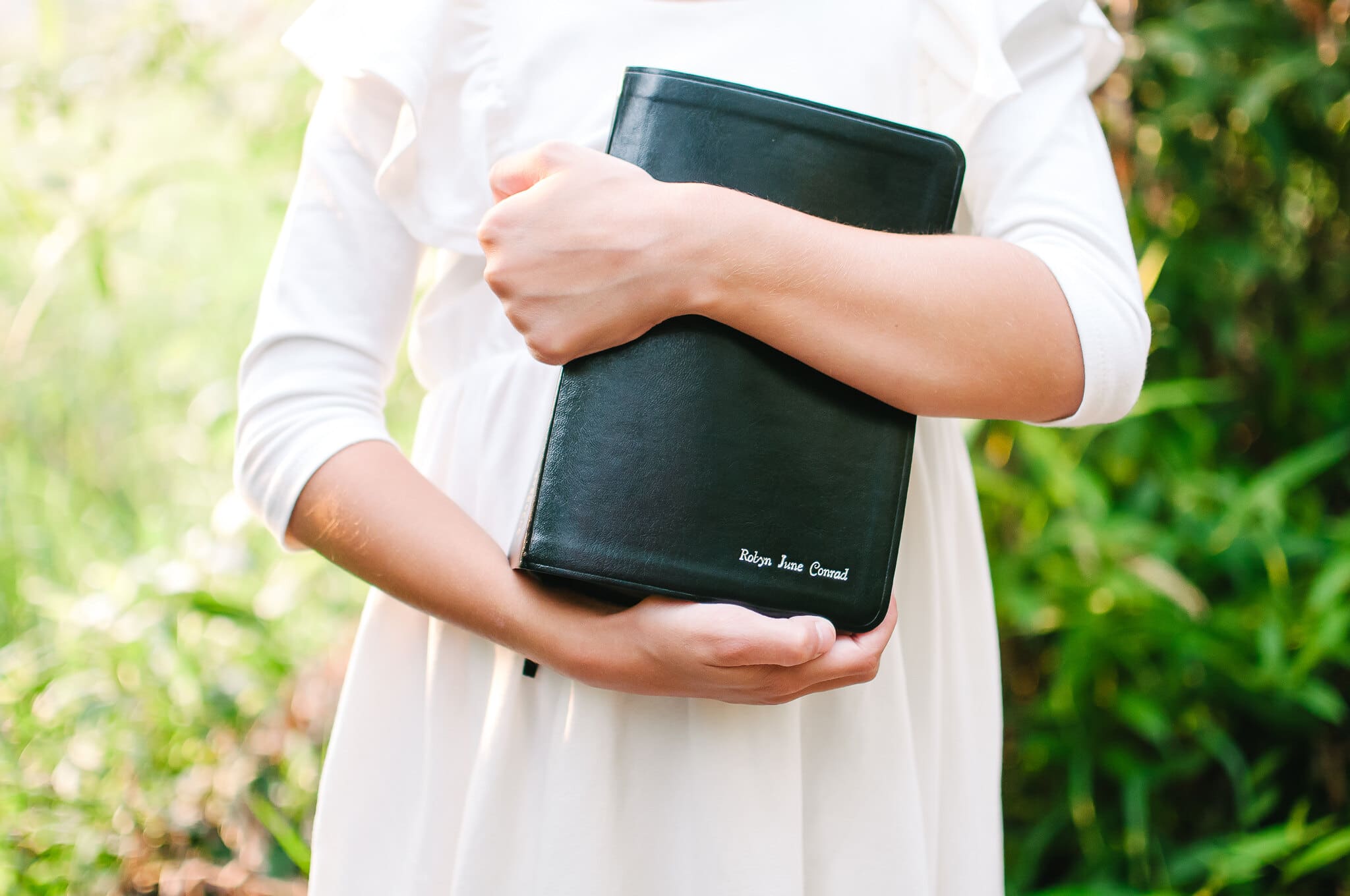 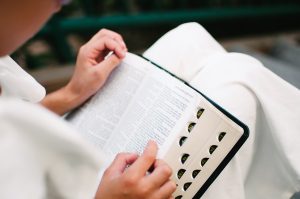 “For the word of God is living and active and sharper than any two-edged sword and piercing as far as the division of soul and spirit, of both joints and marrow, and able to judge the thoughts and intentions of the heart.”  Hebrews 4:12

The Word of God is a living tool. It cuts straight into man’s soul. It reveals his nature and character and his utter sinfulness. God uses His Word to expose man’s heart and motives. Not only can it be used to hack a man into pieces in order to expose his sinfulness, but it can also be used to put him back together again. We can see that in:

“I will bow down toward Your holy temple and give thanks to Your name for Your lovingkindness and Your truth; for You have magnified Your word according to all Your name.”  Psalm 138:2

God has exalted His Word to the same level as His Name. The Bible is not the word of men – it is the Word of God. All glory that belongs to Him also belongs to His Word. 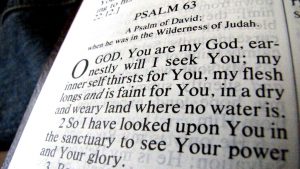 The inspiration of the men who wrote the books of the Bible is not the same type of inspiration that Byron, Shelley, or Keats had when they penned their volumes of poetry. The Inspiration of Scripture refers to the process by which God used to reveal His Word to man. It was done by supernatural means. Scripture describes this process to us. There are four thousand times that Scripture claims to be the Word of God.

“All Scripture is inspired by God and profitable for teaching, for reproof, for correction, for training in righteousness; so that the man of God may be adequate, equipped for every good work.”  2 Timothy 3:16-17

It does not say that the men were inspired to write the Scriptures. It says that Scripture itself is inspired. That is a key point to note. These men had nothing special about them – and in fact, not everything they wrote ended up in the Canon, because not everything they wrote was inspired. Only Scripture is inspired. The Greek word here, theopneustos, “inspired by God” means literally “God-breathed.”   God spoke Scripture. It doesn’t mean God breathed INTO Scripture written down by men, but that God breathed OUT the Scripture. God spoke exactly what He wanted said. We see this in Psalm 33 as “breath of His mouth”.  All Scripture conveys exactly what He wanted said – word for word.

“But know this first of all, that no prophecy of Scripture is a matter of one’s own interpretation, for no prophecy was ever made by an act of human will, but men moved by the Holy Spirit spoke from God.”  2 Peter 1:20-21. Let’s take a look at this passage:

“As to this salvation, the prophets who prophesied of the grace that would come to you made careful searches and inquiries, seeking to know what person or time the Spirit of Christ within them was indicating as He predicted the sufferings of Christ and the glories to follow. It was revealed to them that they were not serving themselves, but you, in these things which now have been announced to you through those who preached the gospel to you by the Holy Spirit sent from heaven—things into which angels long to look.” 1 Peter 1:10-12

“… making the voice of God speak to us in a human accent, and His Word to address us in our own tongue,”  said James Bannerman. 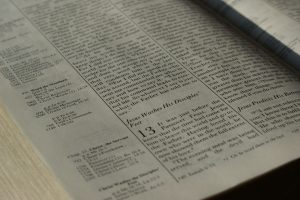 Inerrancy also means Infallibility. This means perfection. There are not any contradictions found in scripture, though upon first glance there appears to be. There are no mistakes or errors in the original manuscripts. Neither the prophets nor the apostle made errors when they penned down the Word of God. Scripture is the only source of divine revelation. It is the only and final authority for the church. This concept was the crux of the entire Protestant Reformation. This is the doctrine of Sola Scriptura.

“As for God, His way is blameless; the word of the Lord is tried; He is a shield to all who take refuge in Him.” Psalm 18:30

Biblical inerrancy also refers to the fact that Scripture does not affirm anything that is erroneous. The Bible is not only completely free from error but is incapable of teaching error. John Calvin said, “The word of God is pure, and without any mixture of fraud or deceit, like silver which is well refined and purified from all its dross.”

“So that by two unchangeable things in which it is impossible for God to lie, we who have taken refuge would have strong encouragement to take hold of the hope set before us.” Hebrews 6:18

God cannot lie. Since God cannot lie what He has breathed out can not contain any errors in its original manuscripts. 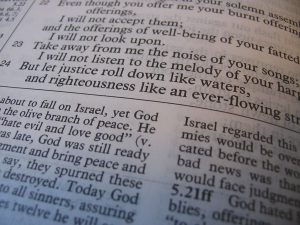 Understanding the Gospel is vital for a fallen sinful man to be reconciled to God. The only way to know the Gospel is to know what the Bible says. If the Bible is unreliable, how can we be sure of our eternal fate? If the Bible is unreliable, how can we proclaim a reliable gospel to others? The Word of God must be infallible and inerrant because God is perfect. He alone is infallible and inerrant. We can rest on the authority of Scripture because God is Holy and Perfect. The very nature of God is the basis for the authority of the Scripture. This is the authority of scripture. Authority means the right to command or dictate actions and belief.

Scripture is our final authority. It is the supreme authority that governs all others. It plays a magisterial role in the Christian’s life. All authorities – church leadership, tradition, historical texts not in the canon – all submit to scripture and must align with scripture.

The Westminster Confession of Faith says “The whole counsel of God concerning all things necessary for His own glory, man’s salvation, faith, and life, is either expressly set down in Scripture, or by good and necessary consequence may be deduced from Scripture: unto which nothing at any time is to be added, whether by new revelations of the Spirit or traditions of men.”

In God’s Providence, He chose men to be the pen by which He wrote down His Word. He allowed their personalities, circumstances, and backgrounds to come through in their writing. Each writer’s unique writing style came through. These men were not in an automatic writing trance like is practiced in the occult. Yet, their words were not their own but God’s. We don’t know exactly the mechanics of how God inspired them to pen His words, but He did.

“Then the Lord stretched out His hand and touched my mouth, and the Lord said to me, ‘Behold, I have put My words in your mouth.’” Jeremiah 1:9

If Scripture wasn’t Inspired, if Scripture was merely penned down by men – even if these men were given a special revelation and left to interpret it themselves – we would be left with something written by sinful, fallible men. We could not be completely sure that everything they wrote down was completely accurate. Sola Scriptura is a natural consequence of Scripture being Inspired. It is the absolute sole authority we have – completely free of error since it is spoken by a God who is Perfect and without error. But we can rest assured knowing that God not only gave the men special revelation but also gave them the words to write down. This inspiration preserved our Scripture from any type of error. Our Scripture is indeed God-breathed and wholly trustworthy. We can rest assured that we have divine authority in the Scriptures.