The Truth Matters Conference and the Sufficiency of Scripture Part 2 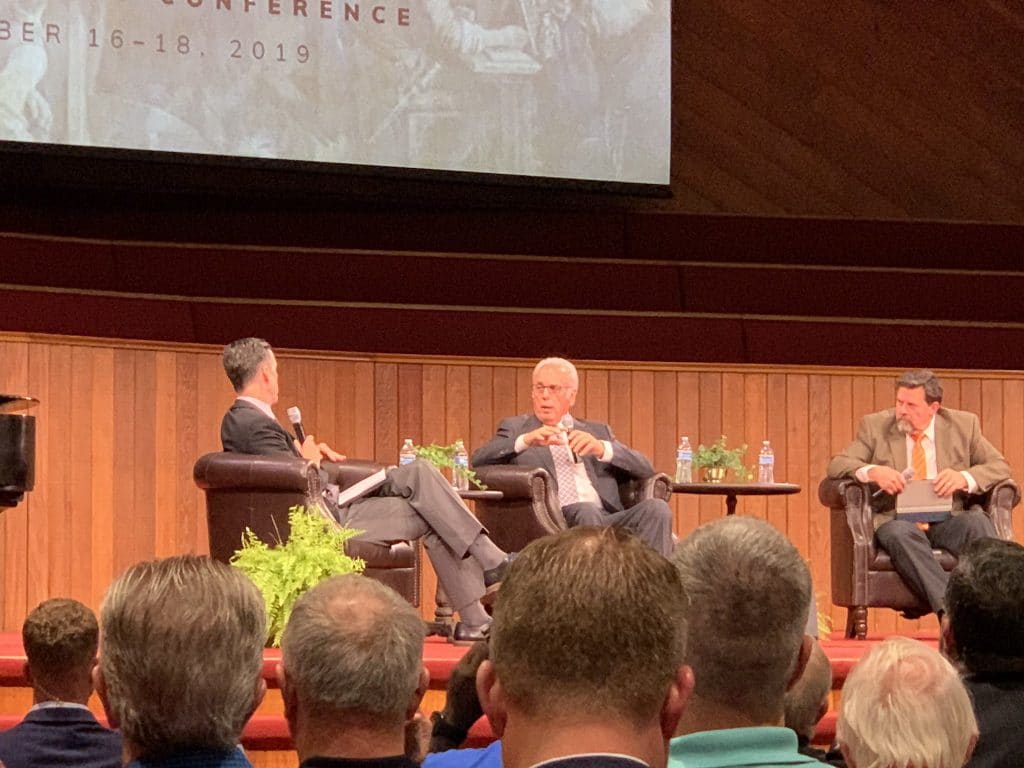 Doctrine Divides – and Rightly So

There are some hills worth dying on. Others, not so much. There are some issues in Scripture, primary issues, on which we that we cannot be wrong. Other issues, tertiary issues are things that we can lovingly disagree on and still have fellowship with one another. When you see a believer, who is in serious error, someone who is wrong on a critical doctrinal point – the most loving thing you can do is to tell him that he is wrong. How hateful it is to know that someone is wrong on a critical issue – an issue that could affect whether or not this person or others in his influence has eternal life – and NOT warn him.

Tertiary issues or the secondary issues that we can lovingly disagree on will include issues pertaining to church government, Eschatology (doctrine of the End Times). Even certain sublevels of Soteriology can be a tertiary issue – the great debate between Calvinism and Arminianism. Other tertiary issues would include whether baptism is by sprinkling or immersion, how the worship service is conducted, etc.

Dr. Albert Mohler in A Call for Theological Triage and Christian Maturity, distinguishes the hierarchy of doctrinal divides into three categories:

Our culture dictates to us that it is unloving to judge others and that tolerance for all things is how we show love for one another. However, the Bible says just the opposite. When we judge something or someone rightly, that is, according to Scripture, it is one of the most loving things we can do for someone. It is urgent that we warn of the danger they are in when they are in grievous error. If judging others was wrong – then God would be in error. The Bible is clear that God is a judge, and that Christ will judge all mankind based on their faith.

“God is a just judge, and God is angry with the wicked every day.” Psalm 7:11

“He shall judge the world in righteousness, and he shall administer judgments for the people in uprightness.” Psalm 9:8

“I have come as a light into the world, that whoever believes in Me should not abide in darkness. And if anyone hears My words and does not believe, I do not judge him; for I did not come to judge the world but to save the world. He who rejects Me, and does not receive My words, has that which judges him—the word that I have spoken will judge him in the last day.” John 12:46–48

Our judgments are not to be made from our opinions but based on the Scripture. We must appeal to a source higher than ourselves – the very inerrant, Word of God. Scripture is the only sufficient source we have of truth, it is the only measure by which we can judge ourselves and the actions of others.

Here in Matthew, we can see that Christ is warning others about making a wrong judgment. Any and all judgment should be free from hypocrisy. This statement is also a judgmental statement in and of itself. In verse 5, Christ tells us that “then you will see clearly to remove the speck from your brother’s eye.” This is directions for how to judge rightly. We must make sure that we judge ourselves first, before we make judgments about others. Just a few verses down we have more directions on how to judge rightly, especially regarding having discernment with false teaching. This is critical – because false teaching will lead other people astray.

“Beware of the false prophets, who come to you in sheep’s clothing, but inwardly are ravenous wolves. You will know them by their fruits. Grapes are not gathered from thorn bushes nor figs from thistles, are they? So every good tree bears good fruit, but the bad tree bears bad fruit. A good tree cannot produce bad fruit, nor can a bad tree produce good fruit.  Every tree that does not bear good fruit is cut down and thrown into the fire. So then, you will know them by their fruits.” Matthew 7:15-20

Our goal is to bring others to Christ, not to put people down. We must share the truth of God’s word with them so that they may repent and grow closer to Christ. All judgment is supposed to point people to the Gospel, not to humiliation. We cry out “Repent!” out of love and urgency. The church itself is built upon Christ as our foundation and the sole authority of His Word. This means that the Bible needs to dictate every aspect of our life – and when we err, we should call one another out.

“Having been built on the foundation of the apostles and prophets, Christ Jesus Himself being the corner stone,” Ephesians 2:20

Sin, when left unchecked, will grow and fester. Sin only causes pain and destruction. This is why our lives need to be marked with continual repentance in our journey of sanctification. It is out of our love for one another that we will lovingly rebuke our brother or sister when in error.

“Take care, brethren, that there not be in any one of you an evil, unbelieving heart that falls away from the living God. But encourage one another day after day, as long as it is still called ‘Today’, so that none of you will be hardened by the deceitfulness of sin.” Matthew 3:12-13

“My brethren, if nay among you strays form the truth and one turns him back, let him know that he who turns a sinner from the error of his way will save his soul form death and will cover a multitude of sins.” James 5:19-20

The Greek word often translated “rebuke” is “elegcho.” It means “to reprimand and convict by exposing, sometimes publicly, a wrong” We are commanded to rebuke our brothers and sisters when they are in error. Another word for this is to “reprove”. We are commanded to call out sin in love, even when it is socially unacceptable to do so. In order to love each other fully, we must have the courage to tell the truth in love about what God considers sin. He does not take sin lightly, nor should we. Any time in Jesus’s ministry that he rebuked, he was calling on God’s authority. Jesus rebuked the winds and they stopped, He rebuked the demons and they fled, He rebuked a fever and it left. So it is when we rebuke: we call upon the authority of God’s Word to show them what God has called sinful, and plead that they stop and repent. At that moment we are urging them to let go of their hugging on to their sin and turn around and cling to Christ.

“Those who continue in sin, rebuke in the presence of all, so that the rest also will be fearful of sinning.” 1 Timothy 5:20

“Do not participate in the unfruitful deeds of darkness, but instead even expose them,” Ephesians 5:11

“So that on the contrary you should rather forgive and comfort him, otherwise such a one might be overwhelmed by excessive sorrow. Wherefore I urge you to reaffirm your love to him.” 2 Corinthians 2:7-8

All rebuking is urging people to see what their sin is before God, and pleading with them to repent. If they repent we gladly extend it and show them in scripture that God too is quick and willing to forgive. Rebuking isn’t about hatred, animosity, or belittling. Rebuking is an act of grace. Rebuking is a form of encouraging and building up. It must be done with the right motives. The goal is not to heap on shame and guilt or to tear down. The goal is to restore them, to increase their delight in God.

“Therefore I urge you, brethren, by the mercies of God, to present your bodies a living and holy sacrifice acceptable to God, which is your spiritual service of worship.” Romans 12:1

“Therefore I, the prisoner of the Lord, implore you to walk in a manner worthy of the calling with which you have been called.” Ephesians 4:1

“Better is an open rebuke than love that is concealed. Faithful are the wounds of a friend, but deceitful are the kisses of an enemy.” Proverbs 27:5-6

How we rebuke someone will vary from situation to situation. If a dear friend, a fellow church member sins, then I would go to her privately. Following the procedure marked out for us in Matthew 18. If after private rebuking and she is still refusing to repent, then I would go to her with two others. We would implore her to repent. If she still refuses, then the pastor would get involved – and it may be an issue that warrants church discipline. If it is a public figure, and their sin is public – then the rebuking needs to be public too. This also extends then to the public figure’s followers. Urging them to not fall into the same trap and to repent if they need to.

“Savage wolves will come in among you, not sparing the flock; and from among your own selves men will arise, speaking perverse things, to draw away the disciples after them” Acts 20:29–30

John MacArthur has preached solidly from the pulpit for over 50 years. He has not shied away from topics that are deemed by our culture to be controversial. He preaches the Bible from cover to cover, boldly proclaiming the truth of God’s Word – whether it is His promises for us or His condemning of sins. He has made it very clear in numerous of his sermons that he believed that Beth Moore was in sin.

Beth Moore has been called out several times by people who love her and want her to repent. She teaches erroneous doctrine and is further leading others astray by her continual unrepentant actions. Since she is such a public figure, with a public sin, it needed to be addressed publicly. It breaks my heart that she has fallen into error. Years ago, I enjoyed her teaching style and benefitted from several of her books. But the more that time has gone on, the more she has strayed into false teaching.  Some of these include: 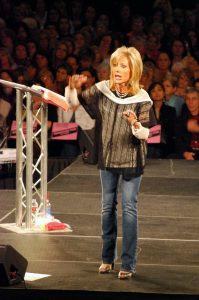 Some people have voiced their concern that John MacArthur sounded too harsh. I disagree. He is a very matter-of-fact person, and he speaks humbly and very plainly. He has called out her sin in previous sermons. Her sin is a public one – for it is done before a very large audience, and is in print and video. It requires a public rebuke. Just because you would have said it in a “more gentle” tone doesn’t necessarily make John MacArthur’s tone unduly harsh. He spoke out of grave concern for the church. Paul’s tone was much harsher in Titus 1:9-13. People who disagreed with John MacArthur are either in support of Beth Moore for what she teaches, or they disagree with speaking against false teachers.

To hear more about doctrine listen to this podcast on What Is Heresy: